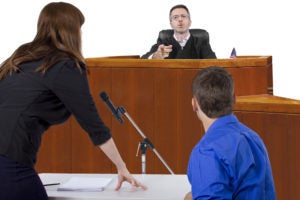 If you have found yourself in the precarious position of needing a drug defense attorney, do not say a word until he or she is by your side. You risk making the case against you worse if you talk to anyone besides him or her. Lettunich Law Firm can assist you during these times.

When your attorney arrives, he or she will explain that you have two choices. You can stick with the claim that the drugs were not yours and you had not used any or you can admit that they were yours and offer an explanation. After a truthful discussion wherein your lawyer is given all the information, the two of you will decide together which road to go down.

When a Drug Defense Attorney Will Work on Your Innocence

Every person, you included, that is charged with a crime is considered innocent until proven guilty. This means the prosecution, usually the state, must convince a jury that you have committed the crime. Neither you, nor your drug defense attorney need to do anything to prove your innocence. In fact, a defendant like yourself can merely remain silent and not present any witnesses and then turn around and argue the prosecution failed to prove its case. However, most  drug defense attorneys present their own witnesses so as to counteract the government's case.

In addition, the district attorney must convince the jury of your guilt “beyond a reasonable doubt.” This heavy burden of proof requires that the jury has to have a moral certainty that you, as the defendant, is guilty. With such a high burden on the opposition, many drug defense attorneys try to impress upon them that simply thinking the defendant committed the crime is not enough for a conviction.

An alibi can testify that you were not at the scene of the crime. However, your best friend or brother may not be enough. You may also need physical evidence for further proof. This can be in the form of a receipt or a videotape showing you were somewhere else.

Another way to go is to admit that you did commit the crime, but you did because you felt compelled by the police. This is called entrapment. In other words, entrapment is based on the interaction between police and the defendant, in this case, yourself,  before or during the alleged crime. Typically, entrapment results from law enforcement officers using coercion or other overbearing tactics to impel someone to commit to a crime.

If you find yourself charged with a drug offense in the El Paso area and require a lawyer, do not speak to anyone before you speak to drug defense attorney Brandon L. Lettunich. His firm has the knowledge and experience to handle every aspect of the case.